I got these fresh apples from Balekambang beach on a monthly vacation. We paid Rp. 6000 or about $ 0,6 for 1 kilo of these juicy sweet and sour goodness. Some small parts of the apples looks over-ripe actually, which explains the cheap price. I let it inside the bag for 2 days before finding out what to do with it.

My husband don't like to chew on hard foods, so I have to find a way to make it acceptable for his taste. I was a little bit uninspired actually with the piles of work need to be done. But during my trip home from Tata's house on a rainy late afternoon, inside a microlet, I suddenly had the urge to make apple pie.

There are few challenges that I have to deal with to execute the plan. First of all, it's been ages since the last time I bake, and I have no any idea where did I put my oven. Secondly, I have zero idea on how to make a pie crust. So once I got home, I check on the internet on friend pies recipe. Frankly, most of them use ready make biscuit dough to create the pie crust, so I have to fhgure out by myself.

I mixed a bowl of flour with a glob of margarine just until the flour turned like yellow powder. Then I take a glass of water which has been mixed with salt and pour it into the flour mix little by little until the dough can be formed well. To make it suppler, I put the dough inside a magic jar and let it out after 10 minutes.I knead it well and add a little bit of flour until it is not sticky anymore.

Meanwhile I made the filling recipe. I chopped the apples and cooked it with melted butter/margarine until its soft. I add some sugar to make it sweeter and mix everything well until the apples well cooked. Then I wait until the filling cool enough and the juice is thicker. While waiting for the filling to cool down, I made small balls from the flour dough so I can flatten it into circle pie dough. Then I put a little bit of the filling in the middle of the pie dough, seal the edges and fried them into hot cooking oil until golden brown.

It was a big hit among the family and didn't even last for the next morning. I will definitely make more later! 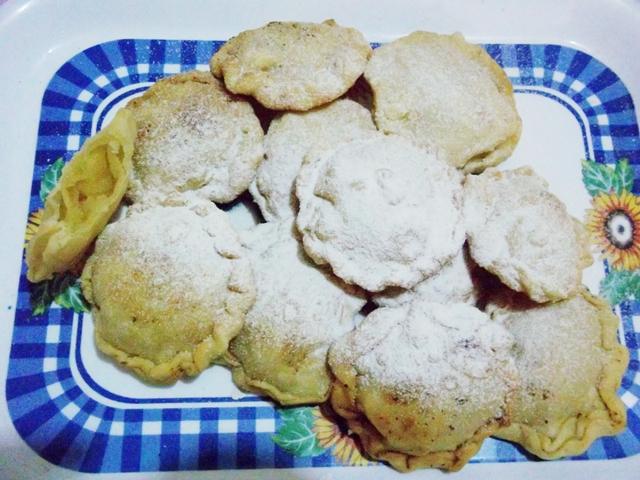 find what you're looking for here :)